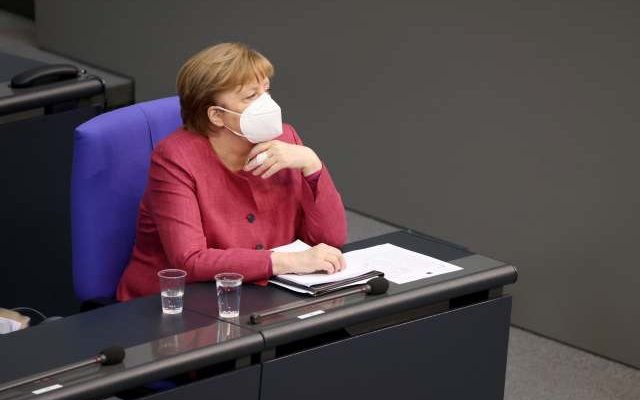 German Chancellor Angela Merkel said Friday she was “delighted” to have received her first coronavirus vaccine dose and encouraged others to follow her example.

The 66-year-old chancellor was given the AstraZeneca shot, which has been designated for those over 60 in Germany.

Merkel joins a growing list of world leaders to step forward and get a jab, yet unlike many of her counterparts, she did not do it in full view of the cameras.

A tweet from her spokesperson, Steffen Seibert, quoted the chancellor and included an image of Merkel’s vaccine documents – but there was no picture of her receiving the needle.

“I am delighted to have received my first vaccination today with AstraZeneca,” Merkel said via her spokesman.

“I thank everyone who is involved in the vaccination campaign – and everyone who gets vaccinated,” she said. “Vaccination is the key to overcoming the pandemic.”

A total of 18.5 per cent of Germany’s population has now received at least one coronavirus vaccine shot, according to the Robert Koch Institute public disease control authority.

Only 6.4 per cent of the population has received their second jab, which leaves Germany trailing behind major Western nations such as Britain, the US and Israel, which have vaccinated a far larger share of their people.

This followed a shambolic start to Germany’s vaccination roll-out earlier this year, which has affected support for Merkel’s conservative Christian Democrat-led government ahead of elections set for September.

But there are signs Germany’s campaign is gathering speed: The country hit a new daily record this week of 739,000 people getting one of the three vaccines currently being administered.

Earlier in the day, Olaf Scholz, the nation’s 62-year vice-chancellor and finance minister, was also given a shot of AstraZeneca.

The vaccine has been troubled by very rare instances of blood clots reported in recipients, leading some countries in Europe to restrict its use to certain older age groups or suspend it all together.