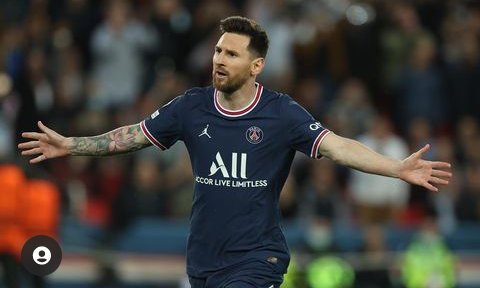 Legendary Arsenal captain Thierry Henry has revealed why Lionel Messi is yet to impress in the French Ligue 1.

Messi featured against Marseille in his fourth match in Ligue 1 at the weekend and once again failed to find the net.

It is his worst goalscoring start to a league campaign since 2005, when he was embarking on his first full senior season.

The 34-year-old has been deployed on the right-hand side of a three-man attack for PSG under Mauricio Pochettino, with Neymar cutting in from the left and Kylian Mbappe in a central role.

PSG tweaked their formation on Sunday night from 4-3-3 to a 4-2-3-1, yet Messi’s right-sided position remained unchanged.

Read: PSG to contend with Liverpool For Karim Adeyemi

Yet Henry believes the formation and role in the team does not suit the Argentine, calling on Pochettino to consider shifting Messi into a more central position.

“Messi is isolated and does not touch the ball too much,” Henry said on Amazon Prime.

“I would not say that he is sad, but I see that his position is isolated.

“I prefer him in the centre, and I do not think he can make a difference from the right.

“He is having a bad time and the centre he can find rhythm.

“There has to be a solution found so that they [Messi, Mbappe and Neymar] can play together.

“I don’t have the exact data at a tactical level, but I think he is having less impact. He participates infrequently.”

Henry also believes that the emphasis of the PSG team means that it has become disjointed, with Mbappe still the central star within the side.

He has claimed that Pochettino’s side do not appear to be playing in unison and are far from being a cohesive attacking unit.

He added: “Messi doesn’t talk too much. He does it with the ball.

“At the moment, the team belongs to Kylian. It is he who makes PSG shine.

“The ball is looking more for Kylian and if there is more than one ‘driver’, the team cannot play in unison.

“On this team there is too much variance. They do not play at the same pace

Watch: Look what Marseille fans did to Messi