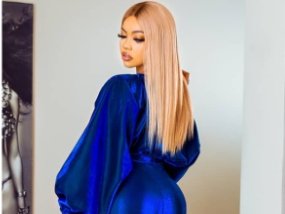 Reality TV star, Nengi has disclosed the reason why she decided to opt for plastic surgery.

The former housemate revealed to a correspondent of BBC Pidgin that she was not comfortable with her stomach any longer as it was getting too big.

She disclosed further that she was always wearing waist trainers which became stressful for her hence, she decided to remove the fat in her stomach.

She wrote:”I have always wanted to do it because I wasn’t comfortable with my body because I felt like I had a really big stomach. I did liposuction, I just took out fat from my stomach. I always had to wear a waist trainer and it was really stressful. I feel like if you are not confident about something and you can change it, why not. For me, it’s not an issue. even before I went to the Big Brother house, I tell people that if they want my doctor’s number, I would give it to them. I just removed fat from my stomach but I didn’t put it in my bottom.”

Nengi also clarified the popular opinion that she put the fat she removed from her stomach into her bottom.

“I think that’s the mistake I made. I wanted it to look all-natural. I didn’t want it too big so that it doesn’t look unnatural, so, I told the doctor not to put it. I wish I put the fat into my bottom.”