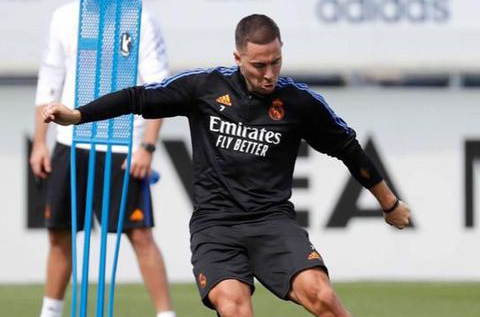 Belgium winger Eden Hazard is ready to fight for his place at Spanish giants Real Madrid.

Marca says despite rumours of a potential departure due to his poor form this season, Eden Hazard is not willing to leave Real Madrid in the winter transfer window.

The Belgium international has yet to rediscover his form at Los Blancos, but he is aware that to achieve his goal of establishing himself in the starting line-up he should be patient and earn his spot through work.

Despite not being given much playing time this season, Hazard doesn’t have a bad relationship with coach Carlo Ancelotti.

Vinicius is currently considered as an undisputed starter on the left-hand side in the Italian coach’s preferred 4-3-3 formation, but, during several games this season, Ancelotti tried to make a space for Hazard by changing the formation and playing a 4-4-2 system, in which the Belgian moved to his ideal position behind the forwards.

However, this formula didn’t work and now the former Chelsea player is struggling to earn playing time.

Watch: Hazard decides his future with the team