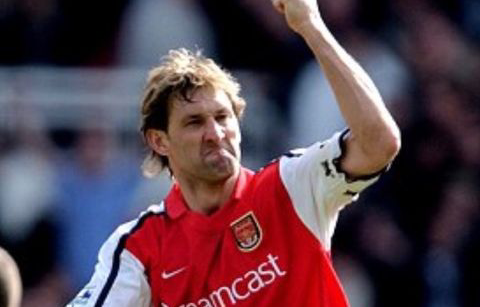 Legendary Arsenal skipper Tony Adams has revealed why he twice rejected approaches from Manchester United during his 19-year career with the Gunners.

Adams spent his entire career playing for Arsenal from 1983 to 2002.

The centre-back made 669 appearances in total for the club, the second most of any player, behind only David O’Leary, who featured in 722 games.

Adams was captain of Arsenal for 14 years and helped the side win 10 major trophies in three different decades.

But his career could have been very different had a move to Manchester United come to fruition on two separate occasions.

“I was a completely different character on the pitch: I felt comfortable, I felt confident, I did my job.

“But off the pitch, I was scared to death, I didn’t know what to do, how to live and emotionally I wasn’t conscious. I know I was drinking too much.

“I felt that London was my home, and I couldn’t for the life of me have lived in Manchester. I turned him down and I turned down a pay increase of £15,000-a-year.”

Adams has been very open about his battle with alcoholism and drug addiction and he has since founded the Sporting Chance clinic for those struggling with addiction.

By 1996 Adams had overcome his alcohol problem, but Arsenal were not in a good place, having failed to win the league for five years.

That was when United revisited their interest in the England international.
“I went to Peter Hillwood, who was the chairman of the club, and was completely open with him about the offer,” Adams explained.

Adams decided to stay put and the arrival of Arsene Wenger as the club’s new manager, as well as the signings of players like Dennis Bergkamp, Patrick Vieira and Nicolas Anelka helped Arsenal turn the corner.

“My salary got trebled as well,” Adams said. “Let’s be honest – a trebled salary, we want to win the league and we have all these good players coming, so I said, ‘alright I will give it a roll, I’ll see what happens’.”

Adams went on enjoy great success at the heart of the Arsenal defence, helping to win the league and FA Cup double in both the 1997/98 and 2001/02 seasons.

The centre-back also won 66 caps for England before retiring in 2002 with his status as an Arsenal legend intact.