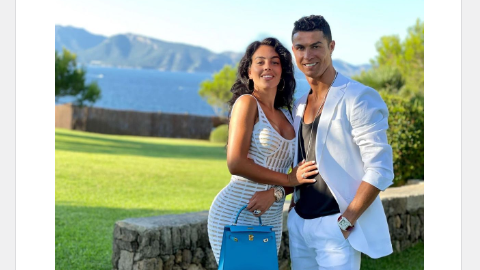 Footballer, Cristiano Ronaldo has announced that he and his  girlfriend, Georgina Rodriguez are expecting a set of baby twins!

According to the UK tabloid The Sun, the Portuguese superstar will now have 6 kids, including two set of twins, once his longtime girlfriend, Georgina gives birth this time.

Cristiano Ronaldo, 36, is already a dad of four, with three of his children born to two surrogate mothers.

He and Georgina Rodriguez shared a cute photo of themselves on Instagram, while holding their baby scans, which was captioned:

“Delighted to announce we are expecting twins👶🏻👶🏻. 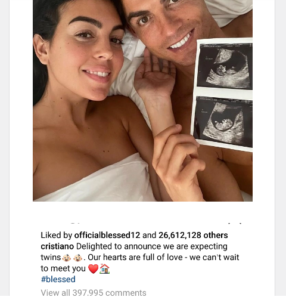 Ronaldo is a dad to Cristiano Jr, aged 11, twins Eva and Mateo, aged 4, and three-year-old Alana Martina, who Georgina gave birth to.

He had admitted back in 2017 that he wanted seven children.