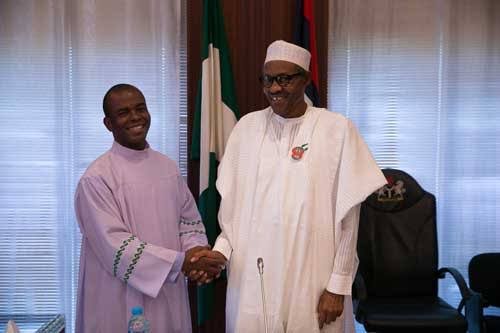 For those who may not know, Father Ejike Mbaka has remained Father Mbaka for years even before this time of social media that his activities has been made so popular and widely reached. Those that had their activities arround Enugu, Ebonyi, Anambra, Imo and Abia States arround 1999 and early 2000 and has the deep fear of God in them, devoid of any sentiment, will tell you that the fiery Priest of the Catholic Adoration ministry has been eating with the devil before, after falling from the Grace granted him by God, in his quest to be more popular and command influence.

Though Rev. Father Mbaka succeeded in his trade over the years, it is quite unfortunate that he has just eaten with the wrong devil with short spoon now, which if care is not taken, may mark the begining of his total destruction, except he seeks for repentance.

The instruction was that I must photocopy the adoration leaftlet and share it to certain hundreds of people then and miracle will happen to me, but that if I fail, evil will befall me. I collected it from him, went home and put it inside my box and did not share as they instructed because I wanted to test the efficacy of their power as a child that grew up from a strong Christian background. Going out the next day, I heard about alot of friends too who collected the leaflet with same instruction, that was when I knew something was wrong somewhere.

Within this same period, we heard about Rev. Mbaka’s confrontations with the then Governor of Enugu State, His Excellency, Chimaroke Nnamani. Father Mbaka had then become the face of opposition to Nnamani’s government in Enugu State and even went ahead to tell the world then that Chimaroke Nnamani’s thugs had fired gun at him but the bullets did not penetrate. During that saga in Enugu then, most of us as Christians stood by Rev. Mbaka believing that the governor wanted to shut the voice of the people for which Mbaka represented. It was not too long, Mbaka fired a prophecy, that if Governor Chimaroke Namani wins his second term in office which was to be in 2003, that he Rev. Father Mbaka will remove his cassock as a priest and resign his priesthood. This his prophecy was circulated widely in cassettes form, the popular means of circulating music then, round the whole South East of Nigeria. His followers then knows what I am saying. Brethren, Chimaroke Nnamani won his second term in office and went ahead to become a senator and Mbaka is still a priest.

The notoriety in seeking for relevance and popularity by Rev. Father Mbaka was to come up again in the build up to the 2015 general elections where Father Mbaka threw caution to the wind and went down the mud in abusing the then President of Nigeria, Goodluck Jonathan. Rev. Mbaka had then become the face of opposition to Jonathan’s government in South East Nigeria and premised his stand on the fact that the Jonathan’s government had failed to come and appreciate him and his ministry. These, Mbaka did in favor of President buhari, calling Buhari then the messiah that has come.

Most ridiculous of Mbaka’s virtuperations called prophecy, was on the recent Imo State governorship elections where after the opposition APC perfected plans to remove the then PDP governor through the supreme court, Nigerians were to hear the outcome through Mbaka’s mouth as a prophecy, that “the fourth shall become the first in Imo and that hope was coming to Imo”. A “prophecy” which was a plan to assuage and calm down nerves and make the daylight robbery and manipulations look divine.

For those who know Rev. Father Mbaka should tell him that he may have succeeded with Chimaoroke Nnamani and Goodluck Jonathan, he should know that eating with Buhari was eating with the devil and he made mistake by using short spoon. He should also be aware that President Buhari does not take hostage in dealing with his friends who turn foe and any other person. In dealing with them, he finishes them clinically and tactically as a retired general. The case of Atiku Abubakar, Bukola Saraki, Dino Melaye, Kawu Baraje, Sowore of the Sahara reporter’s suffixes and Mbaka should learn.

For you saying that we should defend father Mbaka because he is our own and because the North is defending Isa Pantami and the rest, I want to remind you that Isa Pantami did what he did ignorantly for the growth of his religion. Should we also say we want to defend Mbaka because his dinning with Buhari before was for the growth of Christian religion in Nigeria? What has Mbaka’s continuous rumble with Politicians over the years added to Christendom in Nigeria?

Rev. Father Ejike Mbaka should please resign and leave the cassock alone to face politics. He may be in the likes of Sowore, Alhajia Yusuf and some other great political activists in the country.