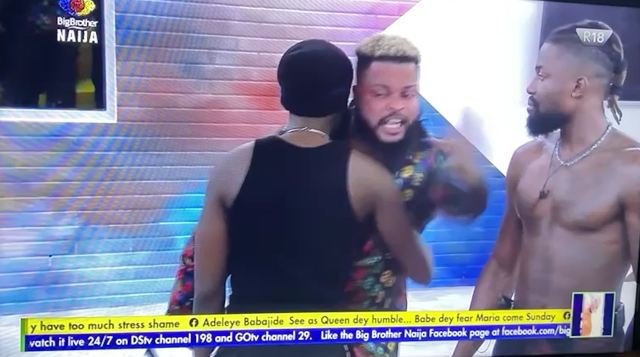 WhiteMoney and Pere finally had a faceoff in the middle of the night.

The brawl all started with a game they were playing, and a question was thrown at WhiteMoney that reads, “Who do you think has had sex in the house?” and WhiteMoney mentioned Angel!

And then Pere who wanted to know WhiteMoney’s answer confronted WhiteMoney while adjusting his belt as he would whip him up like a child. It was a screen, indeed!

And then the house was almost turned into a Royal Rumble with WhiteMoney gesticulating he would “finish up” Pere if he tried this kind of confrontation in the streets.

Meanwhile, Maria, the current head of house, admonished Pere for trying to bully WhiteMoney asking him to apologize immediately but he refused.

Pere in reaction to WhiteMoney’s outburst then said: “He is probably mad that I removed him from the kitchen and that’s his business”

Watch the video below: