Controversial journalist Kemi Olunloyo is still hurt by the insults Davido hurled at her in the course of doing her job as a journalist.

Olunloyo took to social media to talk about her reservations against Davido who had insulted her in the past.

According to the journalist, she has the right to feel bad about the insult Davido hurled at her in the past adding that she was only doing her job as a journalist at that time and his actions were uncalled for. 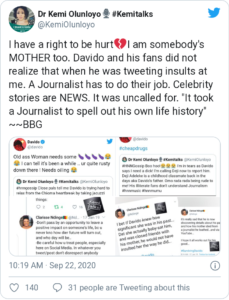 The veteran journalist in a post shared on her Twitter page offered to give the sum of N100k to two social media users who can share the links to stories revealing how Davido insulted her after she reported Chioma’s alleged relationship with Peruzzi. 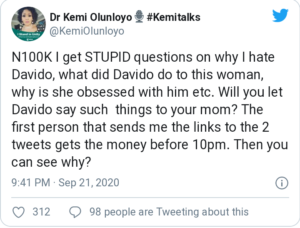 Responding to the post, a follower asked the journalist to move past the issue with the singer but she was quick to correct the impression that the singer is like a brother to her that she babysat him on various occasions while in Atlanta with his late mother Veronica, whenever she wants to visit the mall.

She also stated that her children are much older than the singer in question.

Olunloyo clearly stated that her children are much older than the singer.

She further reacted to another follower who asked why she wants an apology from the singer when she has also spoken ill of him and his family. 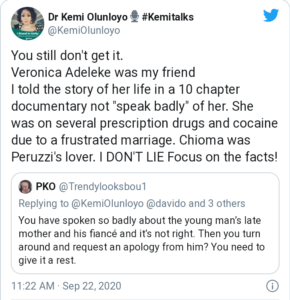 Reacting, Olunloyo used the opportunity to speak briefly about her relationship with Davido’s mother.

She said:“You still don’t get it. Veronica Adeleke was my friend I told the story of her life in a 10 chapter documentary not ‘speak badly’ of her.”