After causing social media buzz some days back, Florence Otedola popularly known as DJ Cuppy has taken her new car for a ride which makes it the first ride after she was gifted the Ferrari.

In a recent post shared by Cuppy on her Instagram page, she was seen riding in the car with someone who later turned out to be her father as they both took a selfie together in the car. 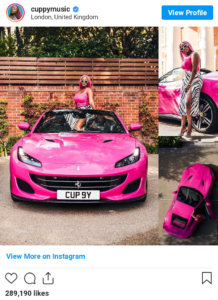 It would be recalled that DJ Cuppy broke the internet with news that her billionaire father had gotten one Ferrari each for her and her two sisters Temi and Tolani.

Following the news of the car gifts, some Nigerian men took the opportunity to profess their love to the sisters. A Twitter user identified as Kene asked who is dating DJ Cuppy and Tolani and she responded that she and her sister Tolani are still single.