Yoruba actress Bukunmi Oluwasina has officially tied the knot to her long time boyfriend whom they dated for 11 years.

Bukunmi didn’t disclose plans of her wedding until it was concluded and shared a video of her in her wedding dress together with her husband.

She captioned the video with the story of their love life and how they eventually got married. 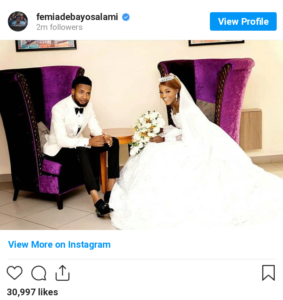 According to the actress, while preparing to go study in the university, she told her husband to give her something to hold on to, he gave her his wristband which she promised to keep forever.

She narrated further that her husband was not sure as regards what the future holds as she might get to meet other men who are better than him.

“It’s 11 years now, and I have met a lot of men like you said, but I haven’t, and will never stop choosing you over everyone,” she wrote.

Colleagues from the movie industry celebrated with her. Actress Nkechi Blessing even shared photos from the wedding ceremony. 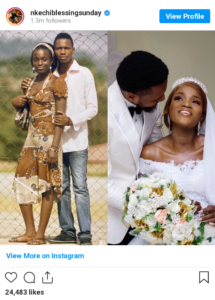 wumitoriola: “Woke up screaming. she said “Aunty mi, won ti propose, and I was waiting for pictures only for me to wake up to this, congratulations darling, may God hold you both in this new journey. congratulations.”

yetundebakare: “Awwwww congratulations my darling. may your Joy be permanent in Jesus name.”