Social media has been left buzzing after DJ Cuppy posted a photo of the new car that her billionaire father Femi Otedola gifted her and her sisters Tolani and Temi which worths N83 million naira each.

The popular disc jockey took to social media to share photos of the new rides as well as her when posing with her new customized Ferrari Portofino. The cars were customized with their brand names and came in different colours. Cuppy’s own is in pink, Temi’s in brown and Tolani’s in blue.

Reacting to the post, Nigerians have reacted to the news while some celebrities like Don Jazzy, Zlatan, Davido also were not also left out.

Davido took to the comment section to congratulate Cuppy and said he wished same for his daughters in the future.

He wrote: “Congrats cuppy …. ?? I will do the same for my daughters one day AMEN .. chai money good” 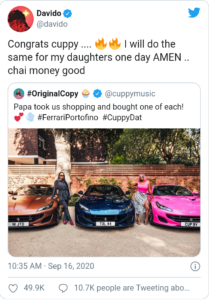 Music executive Don Jazzy also congratulated the singer and stated that his unborn children would receive same treatment. He wrote: “My dear sperm in my prick, if u still remain. I never born you yet. But walahi this kind enjoyment Dey wait you.” 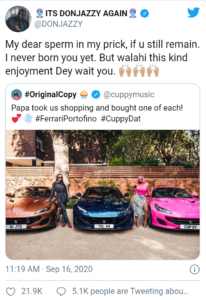 While singer Zlatan said he’s still looking to buy his own Ferarri not to talk of getting one for his own son. “Person like me now na my own Ferrari I still Dey find not to talk of my pikin own” 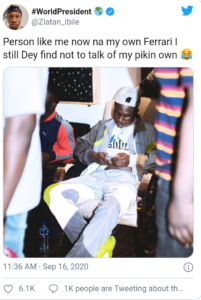