Actor Pete Edochie recently responded to an issue which requires urgent attention regarding an unreleased movie which was sponsored by the Nigerian Army.

According to Sahara Reporters, the actor made it known that he has received threats to his life as regards the role he played in a movie “Fatal Arrogance” which the Shi’ites group claimed that it is aimed at depicting the Islamic Movement in the Country as a terrorist group.

In the movie produced by Anosike Kingsley, the movie star was said to have played a role which required he wore an outfit which made him look like Sheik El-Zakzaky, the leader of the Islamic group who has been in detention since 2015.

While addressing the issue in a video, Edochie stated that he only played a role in the movie and is not aware of what the whole film is all about.

He noted further that whoever hold any grievances against the movie does not have an idea of what it is about because the movie has not been released for commercial purpose.

“I don’t understand what the IMN is driving at. The film we shot is not even out, it has not been edited, the production is not complete.

“If they have complained to the Inspector-General of Police, and the IGP says give me a copy of the film, what are we going to do because the film is not in existence yet, it is not in circulation,” Edochie said. 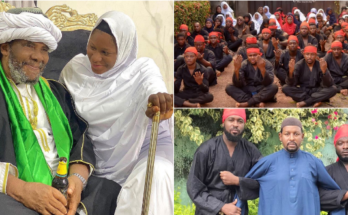