She further told young women that while they use their connections to get jobs for their men, they should also ensure theater they also get one for themselves. 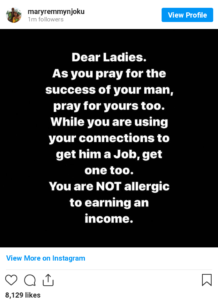 According to her, they are not allergic to earning an income.

Njoku’s advice does not come as a surprise as some women often forget all about thselves and throw all the attention on their men all in the name of love. A lot of women believe that they should shower all their resources on their men because they would also benefit from it when their men stand firmly on their feet.

Sadly, the end result of such is often not what they expect as they are either jilted or betrayed by the same man they invested on.