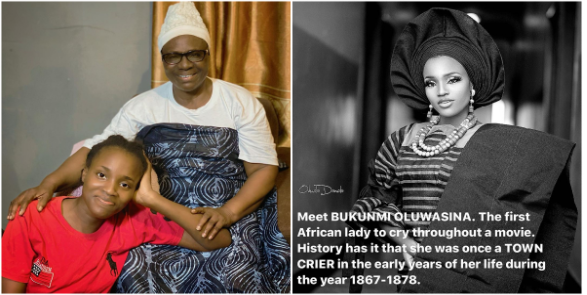 Recently, there have been a trend on social media and a Nollywood actress Bukunmi Oluwasina has been dragged into the trend.

Those who have participated in the history-inspired trend, share a monochromatic image with a caption presenting the individual in the photo as one who has made history for some of their actions.

Movie star, Bukunmi has also got her fair share of the trend and was quick to disclose her experience with her fans.

The actress posted a photo of herself which had been edited into a monochrome version. In the caption, the person who edited the image described the actress as the first African to cry through the entirety of a movie.

“Meet Bukunmi Oluwasina. The first African lady to cry throughout a movie. History has it that she was once a town crier in the early years of her life during the year 1867-1878,” the caption on the photo read. 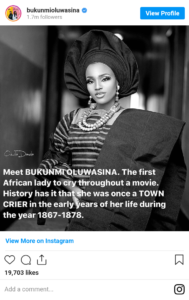 Sharing the post, the actress teasingly noted that whoever was behind the image will suffer for 600 years.

She said: “Saw this on WhatsApp. And I am still alive?? Whoever did dis will suffer for 600 years!!”

raifusemiat: “Truly she can dey for Africa.”