Instablog, is one of the popular blogs on Instagram and it’s known for posting hot and trendy news. The blog has not been too kind to some celebrities as well and everyone is curious to know who handles the page.

The handler of the blog has remained anonymous for years which left people to wonder who could be the face behind this blog.

However, luck smiled on her followers as the handler was exposed today August 25, 2020 after a lady had mistakenly started a live video and unintentionally gone live on Twitter and Nigerians were quick to capture her face. As soon as she noticed she was live, she shrieked and quickly ended the live session and without doubt, her full identity will soon be revealed.

Nigerian singer’s, Naira Marley and Peruzzi also reacted to this development on social media as they have both been constantly featured on the blog for majorly wrong reasons.

According to Naira Marley, he gave her a simple advice by telling her not to be worried but should make sure she gets herself a bodyguard to protect her. 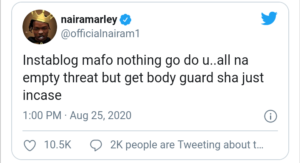 While Peruzzi on the other hand simply said “Instablog, your face clear”

Singer Davido Celebrates Son Ifeanyi As He Clocks One