Brother to the late Nigerian singer Dagrin, Olaonipekun David also known as Trod is a Nigerian indigenous Hip-Hop rapper and afropop singer who decided to immortalize his brother Dagrin by using TROD as his stage name which stands for ‘The Return Of Dagrin’.

Trod is set to storm the Nigerian music industry with his songs and as well bring back memories of his late brother. According to him, the forthcoming EP is a project he wants to proof to the street that he is a ‘Livin Grin’

After a tumultuous few year in the little limelight, “I Feel like a LivinGrin” ‘… said TROD. 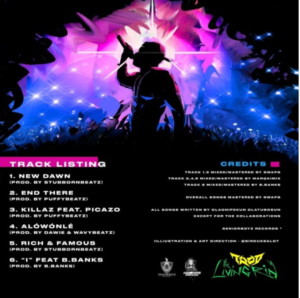 The EP is scheduled for August 28, 2020 and the artiste is planning on reintroducing himself and give the hip hop scene more space in the music industry.