The father of one of the popular housemates of the BBNaija show has shared an epic throwback of the contestant alongside his elder brother on social media.

Popular Nigerian billionaire, Terry Waya, has recently got members of the internet community buzzing after he shared a post on the internet.

He took to his Instagram page with an epic throwback photo of his two sons, Kiddwaya and his elder brother simply identified as Junior standing beside the business mogul in the photo. 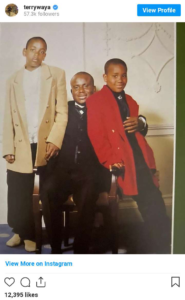 Sharing the photo, the billionaire wrote: “My son Kiddwaya in red with his senior brother Junior.”

After the epic throwback photo surfaced on social media, fans of KiddWaya were spotted reacting in his father’s comment section.

Read some comments about the picture below:

babywealth000: “You raised a king sir, Kudos to you and your wife.”

drjeromephaseone06: “I celebrate u sir.. Sir I wrote a song for u titled Champion na him u be…”

dress4k: “Kidd is so humble and cuteHe is a husband material 101%.”

real___josephine: “He will continue making you and Tiv people proud.”