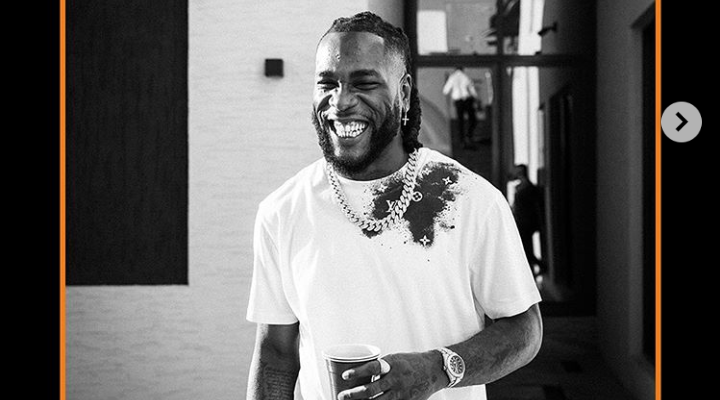 The Nigerian entertainment industry is fast growing by the day with great acts springing up and sweeping music lovers off their feet.

Damini Ogulu popularly known as Burna Boy is one of the top singer’s we have in the country and he has not stopped to thrill his fans with good vibes as well, little wonder he became known internationally.

The Grammy-nominated star didn’t go back on his promise of releasing his new album titled Twice As Tall on August 14, 2020 which left some of his fans awake all night awaiting the release of the anticipated album. 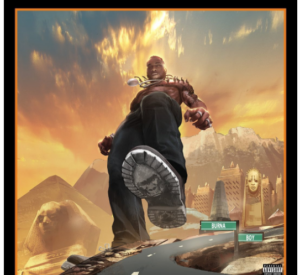 The singer reportedly travelled to the UK and had his listening party on his Instagram live and fans were on hand to show love to the album.

Read some comments from internet users about the album below:

Nicholas Ibekwe wrote: “Just downloaded #TWICEASTALL I will be listening all morning.

I just hope Diddy was able to convince Burna to take it easy on his sampling of Fela.”

Aros wrote: “Burna boy go sing song for Angelique Kidjo language so Grammy no go get any excuse this year.”

Fresh wrote: “1 thing about Burna is the content will never be compromised. The words, concepts & flows stay A1.” 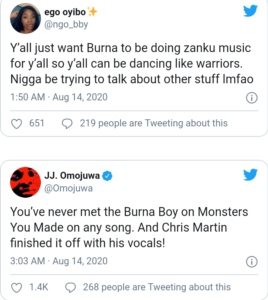 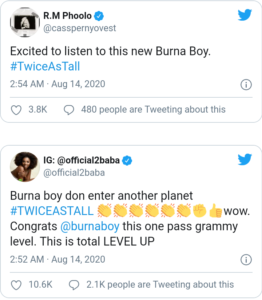 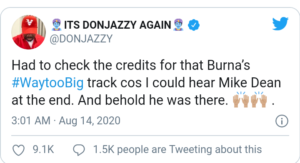