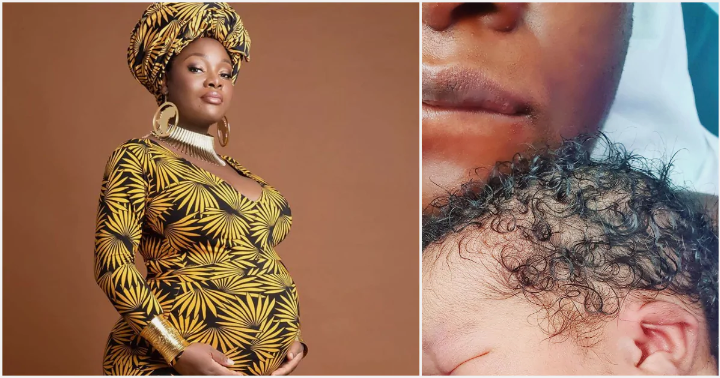 Popular Nigerian OAP Tolu Oniru-Demuren surprisingly shares a sneak peek of the face of her new born child unlike when she had her first, his identity was hidden till he was a year old.
When she had her first child, she did not reveal his face until he was celebrated on his first year birthday, but the case is not the same for her second child as she took to her social media page to share a photo of him few weeks after his delivery. Her face was cut off while the face of the boy was partially revealed. 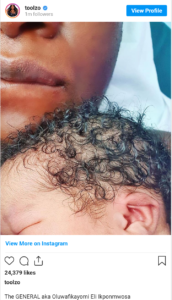 Toolz revealed her newborn’s name as Oluwafikayomi Eli Ikponmwosa otherwise known as The General.
She further revealed that when her pregnancy was approaching six months, she noticed that she had never felt any movement from the child in her belly and this led to her seeking medical attention.  A scan was done and it was revealed that the child she was carrying was too small and may not survive. Toolz was eventually told that the child in her belly was no longer alive and needed to be removed. She added that she was given some medicines to make her go into labour in three days but that it eventually happened a day earlier than expected.