Hours after the recent drama between BBNaija’s Nengi and Lucy, popular fashion designer Toyin Lawani has taken to her social media page to react to it.

During the Arguement, Nengi asked Lucy to act her age and called her an old woman and amoeba which has gotten people taking on social media.

The mother of two who has had issues with her ex-lover said the exact words used in describing her was what Nengi used to describe Lucy as well.

“… is it not ironic that the same words written on the internet were words used on national tv for everyone to see yesterday on @lucyedetofficial,”

She had issues with her ex-lover sometimes ago and some ugly things were written about her because of what her baby daddy said. She disclosed that she found out later that those words weren’t from her ex but from his girlfriend. 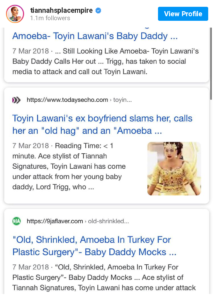 Toyin further explained that the matter has been resolved behind closed doors because of the child involved in the relationship.

She however didn’t point accusing fingers at Nengi, she only stated that the words she used on Lucy on national TV was the exact same words that was used on her when there was crisis in her relationship.

“I didn’t go on TV to put words in the mouth of the culprit, yet the same person went under the knife to look like me,” she said.